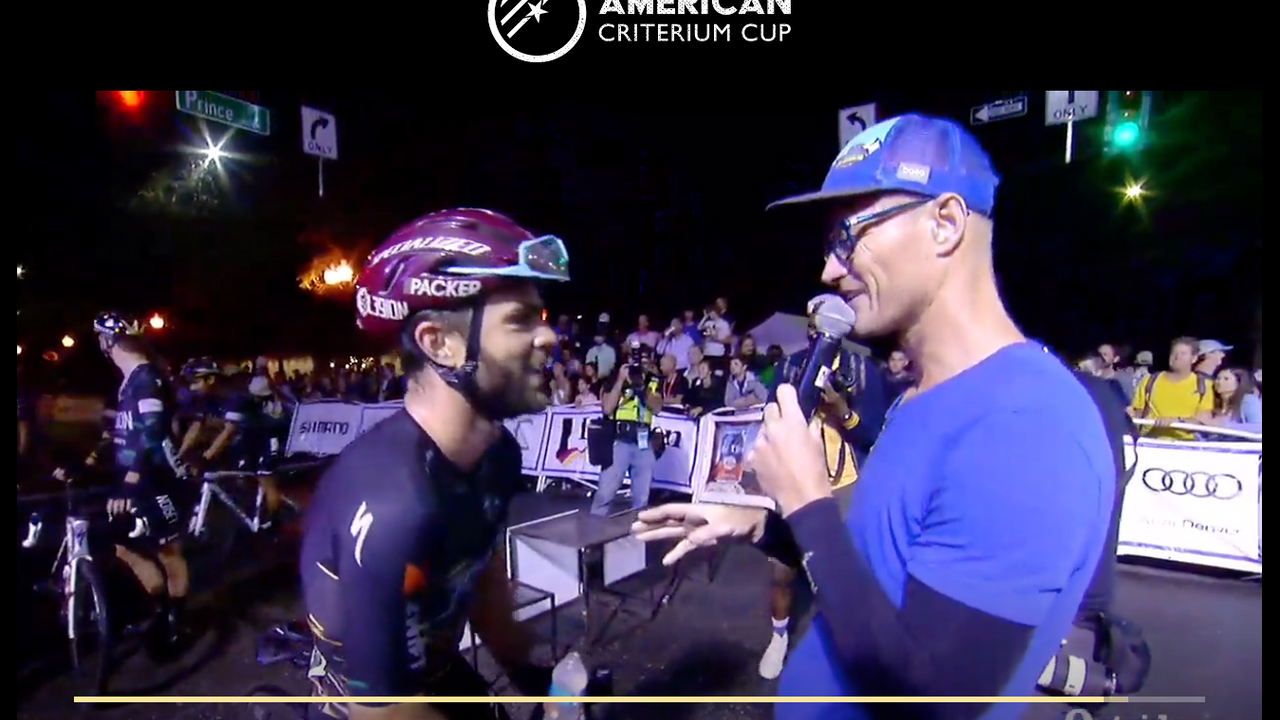 What I Learned from Being an Emcee/Race Announcer

I love and quite frequently use the Shakespearian saying “all of life is a stage”. This past weekend was the Littleton Twilight Criterium, which is race 8 out of 10 in the American Criterium Cup.  This event is covered by Outside TV and provided me the opportunity to take a nationally televised stage as the event’s emcee/race announcer. At the conclusion of the Men’s Pro Criterium race, think Formula 1 racing on bicycles - super fast, tight turns, short course with lots of turns, I had the opportunity to interview the race winner.

For the past 5 years, as the event emcee, I have stayed in the cramped confines of the announcers booth, atop a two story scaffolding at the start/finish line. From this vantage point we have a birds eye view of a large portion of the race as fans fill the bleachers directly in front of our perch. They get to watch live action racing on the jumbotron as my fellow emcee, Michael Welker and I engage in lively play by play commentary for the duration of each race.

After years of delivering quality content and engaging the racers and fans with our knowledgeable banter, a new opportunity arose this year, the chance to climb down from our lofty perch and engage the race winner live on national TV.

I was nervous and excited by the prospect. I wanted to “nail it” when the time came to interview the winner of the men’s pro race, a large field with 75 racers. I poured over race footage from the previous 7 races in the series and brought myself up to speed with the back stories for the different team members.

As the racers careened around the final corner, pushing hard into their pedals, rushing up the long straightaway to the finish line, I made the final announcement then scurried down the two story scaffold to take my spot amongst the photographers, video cameras, and race celebrants.

Standing on the finish line with the race winner, his eyes alight with adrenaline from the race and the realization of his accomplishment, I realized whoa, I am exactly where I want to be… on TV interviewing a champion!

This is it, my big moment!  As I spoke into the wireless microphone, I could hear my voice echoing over the loudspeakers, but wait, why was it so choppy, oh no, it was cutting out.

I stayed calm, made eye contact with the sound technician to fix the problem and then I heard it, my mind, starting the “woe is me” playlist on full blast - why is this happening to me?, this is going to ruin my big moment, stupid technology… you know the playlist.  I had to pull myself back or “I” would ruin my big moment, not the mic.  I switched my focus to the racers sharing stories while those versed in tech worked their magic. Within moments the sound was back up and we just kept the conversation going.

What made this interview so special for me was the winner was a lot like me when it comes to Criterium racing ability. His role within the team dynamic is to work for the team captain in setting them up for the win. But as the race unfolded he was in the best position to win and as they were accelerating beyond 30 miles per hour in the sprint he was given the green light to take the win.

My takeaways from this experience are trifold, yes, like a brochure:

No matter what kind of stage you are looking to take - meeting room, court room, toasting the groom, or commanding an entire room - we'd love to work with you on your stories, audience engagement and delivery.